Dogs Are Being Trained To Sniff Out Coronavirus 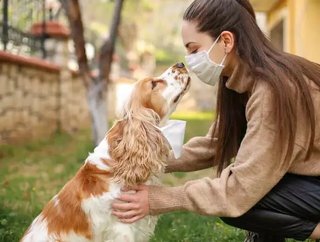 Some dogs are now being trained to sniff out people who have the coronavirus even before they show symptoms. We take a look at how this could work. Res...

Some dogs are now being trained to sniff out people who have the coronavirus even before they show symptoms. We take a look at how this could work.

Researchers in the UK are conducting extensive trials to see whether trained sniffer dogs can detect the coronavirus in patients, even before they show any symptoms.

Previously, it's been found that people with illnesses like malaria, cancer, and Parkinson's give off a particular odor, which dogs are trained to detect. The research team behind the trial is hoping the same will be true with COVID-19.

Researchers at the London School of Hygiene and Tropical Medicine (LSHTM) are collaborating with Durham University and the charity Medical Detection Dogs to carry out the project. The team first announced their trial in late March, and have now received £500,000 ($610,000) worth of funding from the government.

Lord Bethell, the minister for innovation, said the UK government believed the dogs "might provide speedy results as part of our wider testing strategy," the Guardian reported. If successful, the sniffer dogs could screen up to 250 people an hour and play a vital role in detecting the virus in key transportation hubs, including airports and train stations.

The patients would wear sterilized nylon socks to collect odour samples. The socks are essential in the process because nylon "is a very good matrix to collect odor" and has proven to be an easy and effective way to obtain a person's scent, explained Professor James Logan, the project's lead researcher and head of the department of disease control at LSHTM.

Once the samples are taken, half will be sent to a lab where scientists will try to determine what chemicals the odor is composed of — in other words, finding out what COVID-19 smells like. The other samples will go to the charity based in Milton Keynes — just outside of London — where six specialist dogs dubbed "The Super Six" will be trained to sniff them out.

The intense dog training will last between 8 to 10 weeks. It includes putting the samples on metal stands along with other scents from people not infected with COVID-19. When the dog can point out the coronavirus scent, it gets a treat.

The team hopes the dogs will be able to detect the coronavirus before people show symptoms of it.

The team expects the final results to come in between August and September. If these are promising, they will move into the next phase of the project, which involves looking at how it can work on a larger scale. The researchers hope that the first set of dogs could be deployed to key transportation hubs in the UK, including airports and train stations within the next six months. Each dog could potentially screen up to 250 people per hour.