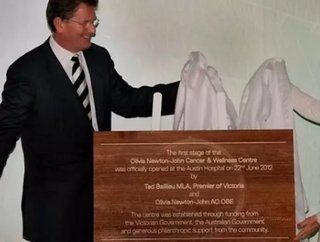 The Olivia Newton-John Cancer and Wellness Centre, in Melbourne, Australia, has been set up to ensure that public hospital patients are afforded the sa...

The Olivia Newton-John Cancer and Wellness Centre, in Melbourne, Australia, has been set up to ensure that public hospital patients are afforded the same level and quality of care that Newton-John had during her own fight with breast cancer, twenty years ago.

Speaking at the unveiling, Newton-John gave her thanks to the many people who had worked tirelessly to make the centre a reality:

“I know when you’re going through cancer it’s a pretty daunting thing to go through and (it helps) to be in a space that’s a healing space with a lot of light, and know that there’s support, not just with the wonderful treatments at the centre but in the program as well.”

The centre will offer a more holistic cancer programs, combining research and treatment with therapies such as acupuncture, massage, music therapy, meditation and counselling.

Speaking about the less invasive treatments, the singer and actress noted that the wellness program played a crucial element in her own battle:

“I know from my own experience. I had to find it myself and go to different places, or have them come to me. I was lucky I could do that, but most people can’t so that’s why this is so wonderful.”

The centre will comprise a total of seven levels, three of which will be officially open to the public from 2 July 2012, including the research laboratories, radiation treatment clinics and day oncology. Other levels, to include inpatient wards and a palliative care unit are scheduled to open in twelve months time.

The project originally started back in 2002, and following a decade of fund-raising and donations from more than 40,000 private donors, as well as state and federal governments, the $189million centre now forms part of Melbourne’s Austin Hospital.

“We are really trying to make things better for people who have cancer, through research we find cures and better ways to treat cancer and through wellness programs we found better ways to support patients and their families.”