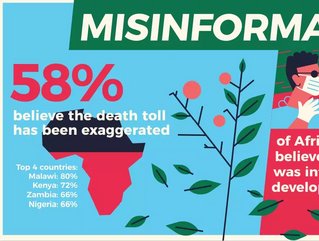 The Ichikowitz Family Foundation’s 2021 African Youth Survey reveals that nearly four in ten (39%) young African men and women polled would probably not or definitely not take the vaccine, if given the opportunity.

The survey includes the views of 4,500 young people aged 18-24 from both major urban and rural areas across  the African continent, including Angola, the Democratic Republic of Congo (DRC), Ghana, Sudan, Mozambique, Nigeria, Rwanda,  and South Africa.

The study found that over half the participants believed the death toll attributed to COVID-19 has been exaggerated to further political agendas. Almost four in ten respondents said they believe young people are immune to the disease. The survey's key findings include:

The vaccine rollout has been deeply unequal around the world, with some African countries such as Tanzania only beginning to administer vaccines in July 2021. This is reflected in the levels of confidence among the survey respondents, with 37% saying they are not confident their countries will have access to a safe and effective vaccine.

Despite the levels of vaccine hesitancy the vast majority of people polled (85%) are either very or somewhat concerned about the spread of infectious disease.

The pandemic has been devastating to people's livelihoods. Around 19% of people surveyed have become unemployed, and in South Africa unemployment has soared to 34.4%, a record rate for the country.

Ivor Ichikowitz, Chairman of the Ichikowitz Family Foundation, stated: “Despite our future potential as a geo-commercial and political power in the world, Africa faces diverse yet escalating challenges, each exacerbated by the COVID-19 pandemic. Ours remains the continent with the least amount of vaccines and the weakest healthcare systems.

“It is very worrying that nearly 40% of young people are saying that they won’t take a vaccine. This should be a cause of great concern for governments and health authorities as they are battling to fight the spread of the Delta variant. This is further exacerbated by our findings showing high levels of misinformation about the origins, spread and mortality rate of COVID-19.

“In many countries in Africa, we are bearing witness to the ramifications of ingrained economic and social dislocations which have been brought under a very public microscope as a result of the pandemic" Ichikowitz added. "As reflected on the streets of South Africa in recent months, there is an unprecedented urgency to address these rifts. However, we must view this moment as an opportunity to address the longstanding divisions and infrastructural constraints to growth. It is up to all of us to rise to the occasion to lift the continent to a higher, more inclusive and sustainable growth path."