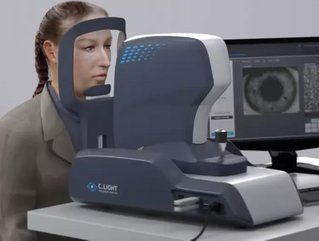 C. Light Technologies will use AI to study eye movements and monitor the progression of Alzheimer's

C. Light Technologies, a neurotechnology and AI company based in Boston, has received funding for a pilot study that will assess changes in eye motion during the earliest stage of Alzheimer's, known as mild cognitive impairment.

C. Light Technologies has partnered with the UCSF Memory and Aging Center for this research. As new therapeutics for Alzheimer’s are introduced to the clinic, this UCSF technology has the potential to provide clinicians a better method to measure disease progression, and ultimately therapeutic efficacy, using C. Light’s novel retinal motion technology.

Eye motion has been used for decades to triage brain health, which is why  doctors asks you to “follow my finger” when they want to assess whether you have concussion. In more than 30 years of research, studies have revealed that Alzheimer’s disease patients' eye movements are affected by the disease, though to date, these eye movements have only been measured on a larger scale.

C. Light’s research takes the eye movement tests to a microscopic level for earlier assessments. Clinicians can study and measure eye motion on a scale as small as 1/100th the size of a human hair, which can help them monitor a patient’s disease and treat it more effectively.

The tests are also easy to administer. Patients put their chin in a chinrest and  focus on a target for 10 seconds. The test does not require eye dilation, and patients are permitted to blink. A very low-level laser light is shown through the pupil and reflects off the patient’s retina, while a sensitive camera records the cellular-level motion in a high-resolution video. This eye motion is then  fed into C. Light’s advanced analytical platform.

“C. Light is creating an entirely new data stream about the status of brain health via the eye,” explains Dr. Christy K. Sheehy, co-founder of C. Light.  “Our growing databases and accompanying AI can change the way we monitor and treat neurological disease for future generations. Ultimately, we’re working to increase the longevity and quality of life for our loved ones."

At the moment developing therapeutic treatments for the central nervous system is difficult, with success rates of only 8% to go from conception to market. One reason for this is the lack of tools to measure the progression of diseases that impact the nervous system.

Additionally clinical trials can take a decade to come to fruition because the methods used to assess drug efficacy are inefficient. C. Light believe they can change this.

“Before this year, it had been almost 20 years since an Alzheimer’s drug was brought to market" explains Sheehy. "Part of the reason for this very slow progress is that drug developers haven’t had viable biomarkers that they can use to effectively stratify patients and track disease on a fine scale. The ADDF’s investment will allow us to do that."

C. Light has received the investment from the Alzheimer’s Drug Discovery Foundation (ADDF) through its Diagnostics Accelerator, a collaborative research initiative supported by Bill Gates, the Dolby family, and Jeff Bezos among other donors.

C. Light recently completed its second and final seed round raising $500,000, including the ADDF investment, which brings their total seed funding to more than $3 million. Second round seed funders included: ADDF, the Wisconsin River Business Angels, Abraham Investments, LLC and others.
The ADDF’s Diagnostics Accelerator has made previous investments in more than two dozen world-class research programmes to explore blood, ocular, and genetic biomarkers, as well as technology-based biomarkers to identify the early, subtle changes that happen in people with Alzheimer’s.