The most efficient health systems 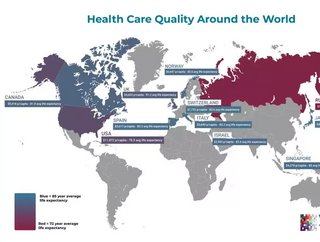 Research from Vantage Technologies reveals the most efficient health systems round the world...

Vantage Technologies, a leading developer of database management software for the UK's NHS, have analysed data from the Organisation for Economic Co-operation and Development (OECD), WHO, United Nations Development Programme (UNDP) and the WorldBank to reveal the countries that get the best health care and quality of life, for the most efficient spend.

The USA has the highest expenditure globally

The complicated structure of health care also has a significant impact on these expenditures. Administration fees alone cost US insurers and providers $812 billion in 2017, or 34.2 per cent of national health expenditures that year.

How do other countries compare in expenditure?

Despite regular criticism, the National Health Service (NHS) is effective when comparing the government spend versus the outcomes of human development and lifespan. While critics point to Switzerland achieving the lowest death rates in Europe, or Germany having a consistently quality health care system, they don’t compare these to the level of expenditure.

Overall, Singapore takes the top spot. Placed 6th in the WHO’s ranking of health systems in 2000, and ranked by Bloomberg as the most efficient in the world in 2014, their health care system is highly regarded. There are many reasons why Singapore has a highly regarded model.

To avoid the excessive use that entirely free services receive, individuals pay part of the cost, with the rest subsidised. This disincentivises individuals from consistently and unnecessarily using health care services they don’t require.

There is also a nationwide health insurance system – Medisave, whereby Singapore’s individuals contribute compulsory monthly payments that finance health care. This is government-controlled, to avoid the USA model of unrestricted medical insurance, whereby there is a monetary incentive to provide more expensive and unnecessary treatments.

Private decision-making on drugs used by the public sector also encourages all pharmaceutical companies to drop their prices to be in with a chance of drug subsidisation, rather than lobbying to place their drug in hospitals at a higher price. The UK’S NHS, for example, are much more transparent about the drugs they plan to subsidise, which can result in suppliers changing their pricing.

Administration is also incredibly efficient, with data shared across all departments to identify any inefficiencies and improve upon them. In 1997, half of ambulance calls were for non-emergencies. In response to this, Singapore introduced a few measures to discourage non-emergency calls. The government introduced a fee of $185 for those who called for non-emergencies. Alongside this, they delivered public education and messaging to highlight the situations that constituted an emergency and non-emergency.

This approach to reducing unnecessary health care costs wouldn’t have been possible without an integrated data system communicating between departments.

“The electronic health records are all connected, and data are shared between them,” said Dr. Marcus Ong, Singapore’s Emergency Medical Services director. “When patients are attended to for an emergency, records can be quickly accessed, and many nonemergencies can be then cleared with accurate information.

“By 2010, there were more than 120,000 calls for emergency services, and very few were for nonemergencies.”

Vantage Technologies have listed three of the key areas that health care providers can optimise to reduce expenditure and improve outcomes.

However, the unnecessary allocation of resources also increases health care costs. In a health care system where per patient spend is exceptionally high but lifespan remains low, overtreatment could be the causation. Personalising patient treatment, and avoiding enforcement of across the board treatments, aids optimising of treatment, as well as allocation of appropriate resources.

While overtreatment is due to provider practises, excessive use is a result of patient behaviour yet is influenced by overall health and education policy. A key takeaway from Singapore’s success is the coordination of departments to reduce health care resource wastage. Utilising data on admissions and public behaviours that harm health care efficiency is an easy way to identify cases of excessive use.

These can then be reduced with further education on the situations that constitute a trip to A&E or an ambulance call-out, targeted awareness of preventable emergencies, or fines for excess use. These practises influence public behaviour to decrease the burden on health care, increasing efficiency.

One of the highest costs in any health care system is administration, without any link between higher admin expenditure and better quality care. Certain systems, such as the US health care system, involve multiple private insurers which can drastically increase costs. A decentralised network of mostly private hospital owners also results in increased costs when moving and communicating between different services. A lack of overall data also reduces the ability to optimise and reform health care, as overseers can’t easily analyse issues within processes.

Martyn Goodhand, Managing Director at Vantage Technologies, comments on the findings of this research: “Data and administrative systems are the key to optimisation. Many health care systems that we analyse have a variety of software collecting data for different departments. These systems aren’t compatible and can’t communicate. So admin costs are then increased when the process could be automated by using the same system.

“Putting all of your data on the same system, in one place, can have many benefits. When you have an overall view of data and results, you can pinpoint areas of inefficiency and see the reasons why that might be the case. This can inform macro health care policy to increase efficiency.

“An immediate effect is a huge reduction in costs" he added. "In the USA, the standardisation of administrative processes could save up to $29,000 per physician annually.

“Even if you have a multi-system, multi-company health care structure, this can be integrated using a single software, for cross-boundary information gathering and sharing, with far less administration. We recommend that health care providers study their software systems and find a modular system that can provide the entire service on one platform.”