The future of drug development: organ-on-chips 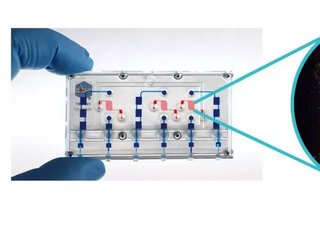 Drug development can be a lengthy process, largely because of the inefficiency of testing on animals. However a new technology called "organ-on-chips" has emerged which is already transforming drug manufacturing.

Rather than test on animals, a microdevice or "chip" is created lined with living cells from human organs and blood vessels. Researchers can then observe the effects of different drugs on these cells, which can more accurately reflect human responses.

Biotechnology Nortis are one of the leaders in this field, so we asked CEO Thomas Neumann about the benefits and challenges of organ-on-chips (OOC), and what he thinks is next for drug development.

What are the benefits of OOC in drug development compared to traditional methods?
Right now, drugs are typically tested using animal models, especially rodents, before progressing to clinical trials with human participants. Unfortunately, animal models often fail to accurately mimic the human condition, and a large portion of drugs that appear safe and effective in animals aren’t so in humans. The high attrition rate of clinical trials is a major contributor to the enormous costs of bringing new drugs to patients.

Nortis organ-on-chip technology has the potential to better predict whether a drug fails in clinical studies. This is exactly what AstraZeneca researchers have demonstrated in their recent publication. In their study, one of AZ’s drugs that had failed in clinical trials due to kidney toxicity was tested in the Nortis kidney chip. It turned out that the drug caused kidney toxicity in the Nortis kidney chip, in contrast to traditional cell culture and animal models, which did not show signs of kidney damage.

How widely adopted is it?
Organs-on-chips were considered an emerging technology a number of years ago, but at this point, the science is quite established. Many pharmaceutical companies and academic research institutions regularly utilise OOC technology to generate data that are more representative of tissue physiology and pathology – which is why the field is growing at a rapid pace.

Are there any challenges to using OOC?
Researchers with experience in cell culture usually have the skills to grow the tissues in the chips until they are ready for experimentation. However, the process requires strict adherence to the cell culture protocols and can take up to several weeks.

To eliminate the tissue culture step for the customer, Nortis began offering pre-seeded chips. In essence, they are chips that already have pre-established living tissues when they arrive in our customers’ labs. Pre-seeded chips bend the time and cost curve for our customers who need to work quickly and efficiently, and also drastically reduces user-caused failure rates.

What else is Nortis planning in this space?
Today, we are known for our leadership in applying OOC technology to assessing kidney function and response to kidney-toxic compounds, such as certain drugs and environmental toxins. Our goal is to continue supporting research in this space, scaling our technology to every kidney project that could benefit from more predictive, robust data.

Additionally, now that OOCs are an accepted and established technology, we’re venturing into the next generation of chips. As we continue to push the capabilities of this technology, our goal is to expand our tissue chips into models of important human diseases and make the technology compatible with lab automation and increased throughput.

What predictions do you have for the future of drug development?
We believe that OOC technology will be increasingly adopted into the drug development process and will, in fact, change how drugs are developed. For example, researchers using OOCs as a tool for testing safety can identify drug candidates that would fail in clinical trials much earlier in the process.

Lastly, OOCs will be increasingly used in the early stages of drug discovery where it is important to understand disease mechanisms and tailor the appropriate cures.