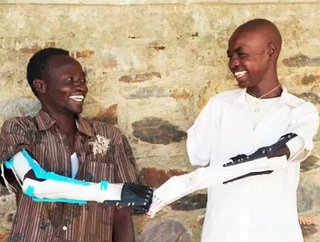 Written by Alyssa Clark The common misconception in everyday conversation today, is that 3D printing fails to produce anything that is really useful f...

The common misconception in everyday conversation today, is that 3D printing fails to produce anything that is really useful for personal or societal needs. However, those who either work in 3D printing or those who have been helped by this modern godsend would respond with one phrase— 3D printed prosthesis. Amputees have been given hope through this technology, with the printing capabilities able to now re-equip people with the limbs they have lost due to terrible injury or illness.

Specifically speaking in terms of children, this 3D printed prosthesis has changed the life of amputee kids by making these limbs affordable and accessible to the middle or lower class, rather than simply an expensive solution for only those who can afford it; the rate at which kids grow calls for a need to exchange the prosthetic regularly, and with the inexpensive nature of 3D printing, this becomes not only a viable option, but an effective solution at that.

The not for profit organization entitled Not Impossible Labs, based out of California, was made aware of the developing success of the Robohand project providing limbs to amputees and immediately got its co-creator Richard van As to Los Angeles to be trained. From this initial encounter, Richard was inspired (being an amputee himself) and decided to enlist the prosthetic printing skills and two MarketBot Replicator 2s and relocate the project to the Mother of Mercy Hospital in Sudan late last year.

For a solid two weeks, Richard’s team printed limbs and in turn, began to train the native Sudan people in the fabrication process even amiss the extreme heat of the desert. The project has not yet been reported to have made a significant impact on the 50,000 amputees in Sudan, however, those who have been physically altered by Africa’s longest war have hope that one day they will regain full-body mobility.

The not for profit organization entitled the campaign Project Daniel, after a Time Magazine interviewee from two years ago who was quoted saying, “without hands, I can’t do anything.” This same child was recently given a 3D printed arm to replace his own, and the results have not only allowed him to regain normal daily activity, but have allowed him to smile once again.