AI: Shaking up the NHS 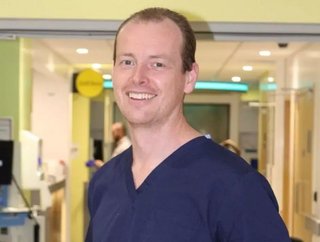 We talk to the UK's first Head of Clinical Artificial Intelligence to find out how AI can transform its National Health Service...

Dr Tom Lawton MBE is a Consultant in Critical Care and Anaesthesia at Bradford Teaching Hospitals in the north of England, where his role involves looking after patients in intensive care. In the summer of 2019, the hospital trust gave him the additional role of Head of Clinical Artificial Intelligence, a first for the UK's National Health Service (NHS).

Lawton's career initially began in IT rather than in medicine. After working as a computer programmer he went to medical school and ended up specialising in critical care, although he remained very interested in data research, particularly around big data and how it can help healthcare.

Lawton explains that with his groundbreaking appointment as Head of Clinical Artificial Intelligence he intends to find ways artificial intelligence can help the healthcare system, particularly in terms of the huge amounts of data being generated.

"One of the things that's happening in the NHS is that there's more and more information available about all our patients" he says. "You used to have a set of paper notes whereas now you've got data coming in from doctors and tests, and you just get this onslaught of information."

"My particular interest is trying to help people filter through this onslaught of information that we have in healthcare nowadays. We're getting into a situation where too much information is almost as bad as not enough, because there's so much distracting stuff going on."

To resolve this, AI can help to highlight the most important bits of data. "This is what I think the best role of AI is - pointing us in the right direction and saying 'look here's something important', to prevent us from getting distracted by the massive amount of data available."

One such area is predictive analytics, "where you might see that the patient is likely to deteriorate before it happens. Then you can put something in place to address this."

"We're currently designing an AI system for people in the community with diabetes. We can see people over years that might develop diabetes but hopefully with AI we can detect this before they develop it, or if they do, pick this up before they develop complications that can be really life-altering, and try to stop that progression."

As a result of Covid-19 the hospital trust has deployed AI's predictive analytics to predict stock levels of Personal Protective Equipment (PPE), and to predict busy periods in the Accident & Emergency department, so that an additional doctor can be brought in to triage patients and help clear out the emergency room before it hits a peak.

Reflecting on changes to the hospital's operations since he started in the role, Lawton explains the impact Covid has had. "One of the big things that has changed with the pandemic is there has been a lot more opportunity for data sharing. The Covid regulations allow data to be passed a lot more freely."

But this also means that data sets have suddenly become much bigger and more complex.

"The other development is around ways to reduce healthcare demand, or try and divert healthcare need away from the hospital. We're involved in a project at the moment looking at using voice recognition to conduct simple conversations with patients over the phone rather than having to come in for an appointment."

"There's a lot of opportunity there, particularly given the pandemic. Patients might only be able to see their hospital doctor every 6 months, whereas if a computer on the other end can deal with most of the simple stuff and then refer more complex cases to the clinician, then hopefully patients can have much easier access, and without necessarily having to come into the hospital."

Lawton's other big area of interest is the safety of AI. "With traditional systems, for instance if I design an oxygen pump, I know what it's going to do because I designed it. With AI, if there's a mistake it's not always clear where the mistake has come from and exactly what's happened."

He's working with the Assuring Autonomy International Programme at the University of York, a group working with industry, regulators and research teams to address safety and assurance issues with robotics and autonomous systems. "I've been looking at how we can make sure systems are safe to use in complex and critical environments like healthcare, so we can bring in AI systems that genuinely improve things."

Lawton believes that the role of AI should be advisory, and not making decisions in place of healthcare professionals. "When AI is presented with a situation it's not familiar with it can fail in weird and wonderful ways" he says. "The best way to deal with that is to have a robust safety system in place, to look at how it works and more importantly how it can fail. Fundamentally there shouldn't be any AI systems making decisions instead of a human at the moment, they are far more useful for pointing out things that are important."

It's a fantastic tool for classifying, he says. For instance AI can be trained to tell between a "normal" chest x-ray and one with abnormalities. "The AI system can separate all the normal x-rays into one pile so we know they're not urgent, and while we'll look at them eventually but it means we can focus on the ones the AI system says are abnormal."

"What they're so far not so good at is telling us exactly what it is that's abnormal, why it's abnormal and what we need to do about it. But in terms of simple classification it can really help to prioritise our work. If you're directing humans to where they can be most useful, that aspect of helping you prioritise is a brilliant use of AI, and will hopefully save the NHS a lot of time."

In terms of adoption across the UK's huge, centralised healthcare network, Lawton says it's going to depend on the rate of acceleration locally. "We have organisations like NHSX that are pushing the AI agenda, and others providing funding for artificial intelligence work, so I think we're going to see it used increasingly, and that's a good thing because it does have a lot of potential to make improvements across the NHS. Hopefully we'll see examples of good practice dotted around the country which will then be encouraged to grow further."

"It's going to be a really interesting time because the health system is unfortunately, especially with Covid-19, in a big shake-up time at the moment so it needs to find new ways of doing things. I think AI will form part of that."