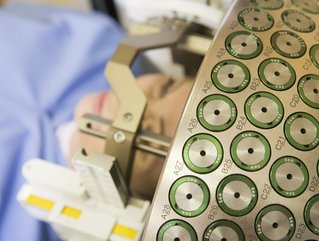 Cerebral arteriovenous malformations (AVMs) arise when an abnormal tangle of blood vessels occurs in the brain as a result of an abnormal connection between an artery and vein. These can have serious consequences such as haemorrhaging, stroke, brain damage and seizures. Gamma Knife radiosurgery represents a massive improvement in the treatment options for AVMs, as a targeted and precise, non-invasive approach. There are currently three treatment options for AVMs which are discussed by a skilled and experienced team for each case to determine the best approach.

What are the treatment options available for AVMs?

There are three different ways of treating AVMs, these are endovascular embolisation (“gluing”), neurosurgical resection (surgery) and stereotactic radiosurgery (Gamma Knife). In some cases, just one treatment modality is required but a mix of these treatments can sometimes also be used depending on the characteristics of the AVM and the patients’ own preferences. In some cases we recommend no treatment.

Generally, for smaller AVMs that are under 3cm in size, Gamma Knife treatment is commonly used.

Larger lesions often require combined approaches. Embolisation can be used to de-vascularise or shrink the AVM prior to surgical or radio-surgical treatments.

How are AVMs diagnosed?

AVMs can occur anywhere in the body but most commonly present in the brain (and less frequently in the spinal cord). Many patients have no symptoms of an AVM until a bleeding event occurs. AVMs are usually diagnosed by MRI or CT head. Angiography can be performed to give the best and most detailed picture of the vascular anatomy. They can often be discovered incidentally, that is to say when a scan is done for another reason. Alternatively, AVMs can present with symptoms such as seizures, headaches or a neurological problem like weakness in one part of the body or speech disturbance. AVMs can therefore have a significant impact on patient’s lives and the specifics of each case should be discussed with a skilled and experienced team, weighing up the options of all three treatment modalities.

Why do we treat arteriovenous malformations (AVMs)?

Untreated, AVMs carry a risk of haemorrhaging which can cause brain damage or death. A 2020 study on the clinical outcomes following cerebral AVM haemorrhage published by the National Library of Medicine found that an AVM rupture has around 20% likelihood to result in mortality, 45% likelihood to result in a minor or major deficit, and 35% likelihood of complete recovery. This means that even when an AVM presents without symptoms and a bleeding event has not occurred, it can be important to treat them to prevent the possibility of a haemorrhage.

There are also several factors that can increase the risk of AVMs haemorrhaging, including its size.

Although it seems counterintuitive, smaller lesions tend to carry a higher risk of haemorrhage due to the higher arterial pressure that builds in smaller vessels.

What are the benefits of Gamma Knife?

Gamma Knife stands out as a treatment option from surgery and embolization in a number of ways, including not requiring a general anaesthetic. In itself, this mitigates the many risks associated with patients going under general anaesthetic, and of open surgery such as infection, bleeding, or wound problems.

Gamma Knife also has the capability to treat very deep and sensitively located AVMs which cannot be otherwise treated. This is because it uses up to 192 precisely focused beams of radiation to target selected brain lesions, without harming the surrounding healthy brain tissue. This is possible because each of the individual beams are not strong enough to damage tissue, but the combined strength where these beams converge transforms the cells of the AVM. From this, over time the walls of the AVM thicken and scar, eventually closing most of the vessels supplying the AVM, thus preventing rupture. Although the procedure involves several steps on the day of treatment including imaging and planning, the treatment itself in many cases can take less than an hour.

1. Is my AVM suitable for Gamma Knife?

Almost all smaller AVMs and a selection of larger ones are suitable for Gamma Knife treatment.

2. My AVM bled, should I have a treatment that works more quickly than Gamma Knife?

This depends on whether the AVM has high risk features for a re-bleed or not and would need to be assessed by a skilled and experienced team.

3. What are the chances of having a complication from Gamma Knife treatment?

The chance of a complication depends on multiple factors including the location and size of the AVM, the number of treatments required and any previous or underlying problems.

4. Is Gamma Knife more or less accurate than Cyberknife?

Gamma Knife and Cyberknife are equally accurate. The biggest difference between the techniques is the lower dose of radiation the rest of the body receives with Gamma Knife.

5. Is the fitting of the frame painful?

The frame fitting is uncomfortable but local anaesthetic and painkillers are available and lots of reassurance is given. Most patients tolerate it well.

6. When can I go back to work after Gamma Knife?

Unless we are worried about you having seizures you will be able to go back to work the next day.

7. When will we start to see some effects from Gamma Knife?

The treatment works more slowly than other treatment options like embolisation and surgery. It usually takes 4 years to reach full effect.