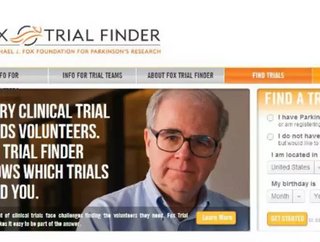 The Michael J. Fox Foundation for Parkinsons Research (MJFF) has launched the Fox Trial Finder (www.foxtrialfinder.org) in the UK, Ireland and Canada...

The Michael J. Fox Foundation for Parkinson’s Research (MJFF) has launched the Fox Trial Finder (www.foxtrialfinder.org) in the UK, Ireland and Canada.

This first-of-its-kind online platform anonymously connects volunteers with and without Parkinson’s disease to clinical trials in critical need of participants.

Fox Trial Finder matches volunteers with the trials most likely to need them, increasing the efficiency of the enrolment process and empowering patients to get more involved in the discovery of new treatments.

The organisation also discovered that more than three in four Parkinson’s patients wished there was a secure and anonymous online tool to help them locate clinical trials in their area.

“Its matching capability removes one of the roadblocks to participation by making it easier to find the right trials.

“The tool instantaneously sorts through scores of trials to find the ones that specifically need you.

“And once you save a profile, Fox Trial Finder will continually alert you to your best matches as new trials launch, without you having to come back to the site to search again.”

“The introduction of Fox Trial Finder as a platform to learn more about trials will help to grow the clinical research community and encourage more people to enrol in trials which will help lead us to a cure for Parkinson’s.

“As someone with Parkinson’s myself, I am passionate about the role clinical trials play in translating science into actual treatments and a tool like Fox Trial Finder brings urgency and efficiency to that goal.

“No matter how much funding, collaboration and effort are put behind drug development, research cannot move forward without the help and involvement of the people who live with Parkinson’s.”

Also commenting on the launch was Dr. Kieran Breen, Director of Research and Innovation at Parkinson’s UK.

“Fox Trial Finder is a really positive step forward in the international effort to help find a cure for Parkinson’s,” he said.

“The more ways we can help people get involved in clinical trials, the more trials can be completed, enabling the development of better treatments and drugs for people with Parkinson’s – and ultimately a cure.”

Launched in beta version last July and officially in April 2012 in the United States, Fox Trial Finder currently includes more than 190 clinical trials in its system, with 60 in the United Kingdom specifically, and nearly 7,000 volunteers have already registered.

The site is now live in the United States, Ireland, Canada, UK and Australia, and is expected to launch in other international locations coming later this year.