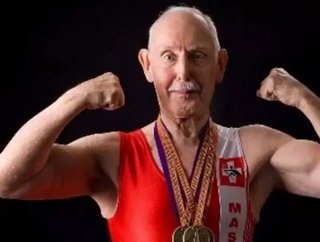 Being a body-builder at any age is hard work; requiring determination, stamina and most importantly, big muscles. When most people reach the age of ret...

Being a body-builder at any age is hard work; requiring determination, stamina and most importantly, big muscles. When most people reach the age of retirement they usually just want to enjoy the last years of their life in quiet relaxation as opposed to abiding by a strict fitness regime and muscle workout.

However, Dr Charles Eugster – a British expatriate now living in Switzerland – has the complete opposite desire and at the impressive age of 91 he has been dubbed as the world’s fittest OAP and the world’s oldest bodybuilder.

His overwhelming passion for anti-aging and fitness has led him to receive 36 gold international rowing medals in the European Masters and World Masters Regattas. Although rowing is a huge part of Eugster’s life, its training alone was not giving him the fitness results he craved. “At the age of 85, in spite of rowing training, I was losing muscle mass,” he explains. “My appearance had seriously deteriorated and I was losing strength. Body building or building muscle mass could help correct the situation.”

To achieve an almost unparalleled level of fitness for someone of his age, there is no doubt he has to work hard. Describing his fitness routine, Eugster says: “The routine is constantly changing in order to ‘surprise’ the muscles and increase the effectiveness of the training.” He elaborates and recounts a recent workout that he followed: “My routine was 30 minutes of interval training on a rowing machine followed by core exercises; three different exercises for the back and three different exercises for the abdominal muscles, followed by a 45 minute endurance exercise on the step machine.”

His extreme efforts are definitely paying off; he scored the highest number of points ever at the 2010 Strenflex World Championships fitness tournament achieving an incredible 57 dips, 61 chin-ups, 50 push-ups and 48 abdominal crunches each within 45 seconds. This is undoubtedly s sure sign that his is the world’s fittest OAP, although Eugster remains modest: “I feel flattered to be called the ‘fittest OAP in the world’, although it’s probably an exaggeration.”

In discussing the rewards that he receives from his body-building and concentrated exercise regime, Eugster declares: “The benefits are indescribable. While most of my friends my age have passed away, I can enjoy life to the full.”