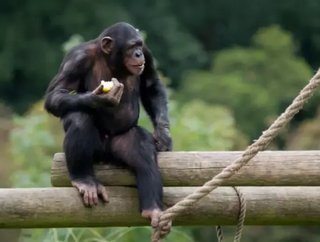 The future is suddenly looking a lot sweeter for almost 400 chimpanzees kept in captivity and used for research conducted by the National Institutes of...

The future is suddenly looking a lot sweeter for almost 400 chimpanzees kept in captivity and used for research conducted by the National Institutes of Health (NIH). Earlier in the year a working group recommended via a report that the federally-supported chimps be retired.

Although the species – who share almost 99% of our DNA – do have potential uses for medical research, the report says, recently alternate technologies have been "shown to address questions that we before may have only been able to address for chimpanzees," said co-chair of the working group K.C. Kent Lloyd of the University of California, Davis.

Sanctuaries like the Chimp Haven Inc. in Keithville, Louisiana and the New Iberia Research Center at the University of Louisiana at Lafayette house a separate group of 219 NIH-supported chimps that have already been retired.

Similar sanctuaries provide living conditions outlined to meet the physical, mental and social needs of the chimps including a minimum of 1,000 square feet per animal; a plentiful supply of fresh fruits and veggies; yards, forest habitats and jungle gyms to play in; and an assortment of toys to play with.

The announcement quickly drew support from a number of animal rights groups, notably the Humane Society. Vice president for animal research issues Kathleen Conlee said although the organization hopes to ultimately end the use of animals in research altogether, the report "finally confirmed that there should be no chimpanzee breeding, which we were also very pleased with."

About 50 chimps should be kept for potential research needs, the report suggests, pointing to their usefulness in creating a hepatitis C vaccine and developing therapies for cancerous tumors.

Once the recommendations go into effect, jurisdiction will only apply to NIH-owned or supported chimpanzees. According to the report, the number of chimps used for medical research in the U.S. was reported to be 930 as of May 2011. The current cost to keep a chimp for medical research is $13,000 each.