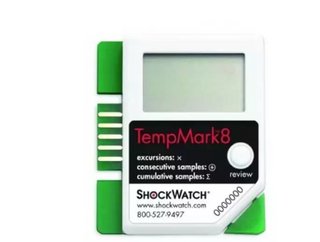 The need to store certain drugs in refrigerated conditions is widely accepted and while many drugs are unaffected by fluctuations in temperature, there are several categories of medicine that must be maintained at between 2°C and 8°C in order to safeguard their quality and effectiveness.

The problem is that pharmaceuticals rarely stay in one place, so although the hospital refrigerator might be ideally configured, the conditions encountered during transit can vary wildly.

Exposure to inappropriate storage and handling conditions, depending on the extent of temperature levels and the period of time involved, may not just impinge on the effectiveness of certain drugs, but in some cases can even have negative health consequences for patients.

It’s an issue that is now being addressed by rapid advances in technology. The risks of deterioration can be dramatically reduced with the deployment of inexpensive monitoring devices such as Lamerholm’s specially designed TempMark8, which records instances where preset temperature limits have been exceeded.

Vaccines are a prime example of the importance of such developments. It was when major immunisation programmes were underway in developing countries that concerns about vaccine instability were first raised.

The fact that large proportions of the population were not benefitting from vaccinations turned the spotlight on the supply chain as a possible cause. In the journey from manufacturer to end user, the vaccines were handled by a number of transport and storage companies, which is where inconsistencies in temperature conditions arose. These came to be known as breaks in the cold chain.

Research prompted the intervention of the World Health Organisation(WHO), which introduced new rules on the transportation and storage of vaccines and encouraged the use of temperature indicators.

However, the adoption of such technology across the wider pharmaceutical sector has been slower. One reason could be that the problems caused by breaks in the cold chain are not as immediately apparent as in the mass immunisation programme mentioned previously, where higher temperatures and extended journey times were more common.

But this should not detract from the risk of deterioration that can result from fluctuating temperatures in other situations.

In the UK, for example, failure to comply with the guidelines imposed by the Medicines and Healthcare Produces Regulatory Agency (MHRA) can result in the wastage of affected drugs, the high costs of product recall and most importantly, a risk to patients’ health.

A significant factor is that while manufacturers are acutely aware of the ideal conditions in which their drugs should be stored, this information is not always relayed fully to the health workers and transport staff who are moving them from place to place. Therefore,an additional issue arises around who should be responsible for ensuring correct storage.

Not only should measures be taken when packing and storing pharmaceutical drugs but when transporting products to suppliers.

For distributors, a failure to keep substances at the correct temperature can be detrimental to their reputation, often costing them vital customers.

This is not something that should be left to chance. Lamerholm has revolutionised the packaging industry by creating a device designed to record up to eight conditions of temperature during packing, storage and transportation. The TempMark8, the first device of its kind to go on the market, allows pharmacists to determine whether packages have been exposed to dangerous temperatures and the safety of the product has been compromised.

The small, single-use device has an adhesive back cover for easy fixing onto packages. The review button allows the user to cycle through alarm level, number of times the predetermined limit was exceeded, consecutive samples over the limit and cumulative samples over the limit. The eight alarm triggers combine three descending (-1°C, 0°C and 2°C) and five ascending (8°C, 10°C, 15°C, 20°C and 25°C).

To help allow for international logistics and extended periods of storage, the device has a battery life of 90 days and then switches into low-battery mode in order to retain the data until the battery is completely depleted.

For pharmaceutical manufacturers, and the packaging and logistics suppliers who serve them, the TempMark8 is a highly cost-effective assurance that the items being delivered have been stored at an appropriate temperature throughout.

The attachment of such a device to a pharmaceutical package not only provides assurance but can also act as a visual deterrent against improper handling, thereby making logistics staff aware of the need to maintain appropriate temperatures.

As a result of technology like this, there is no longer any excuse for manufacturers and carriers to take risks with adverse temperatures.

The IMC Group was formed in 2007 by the amalgamation of Lamerholm Electronics, Hanwell Instruments and Jekyll Electronic Technology. The IMC Group has recently announced the acquisition of Silvertree Engineering Ltd. The group has over 100 years of experience and offers a comprehensive range of instrumentation and communication systems.