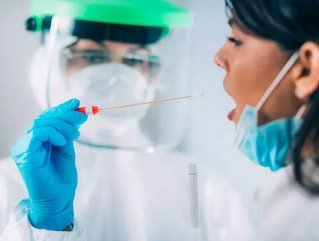 A cyber technology company based in Manchester, UK is developing a rapid Covid-19 testing kit with the aim of safely reopening stadiums to restart sporting events.

The kits will produce test results in 10 minutes that will be saved in a data protection-compliant digital health passport to authenticate the results. Unlike the contact tracing apps currently in use by the Government, the V-Health Passport® will not track or trace a person's live location, ensuring personal data is ultra secure, using advanced security protocols and encryption.

Plans for the testing kit and V-Health Passport® are part of a pilot programme called 'Fans are back' which have been submitted to the UK Government’s Department Of Culture Media & Sport (DCMS) and the Prime Minister’s office. The plans have won praise for being a potential game changer to reopen stadiums, from supporters such as former sports minister Richard Caborn and former England Rugby Captain Mike Tindall MBE.

The pilot programs will initially cover football, rugby and snooker, working with various Government bodies and sporting associations including the Premier League and World Snooker Union.

The pilot will involve randomly selecting a sample group of between 500-5000 home fans to be tested the day before a specially designated football or rugby match using the Covid-19 rapid test kit. Each person will also be provided with a V-Health Passport®, the ultra secure digital health passport to be used on their mobile phone to validate the test results. They will be instructed to download the passport onto their phone prior to the testing day.

The users enter their name, address, date of birth, phone number, and doctor details along with an official identity document such as a passport or drivers’ licence to verify their ID. The uploaded documents are then verified against the smartphone's facial recognition to match the person’s details in a “likeness test”.

The fans will then be invited to take a Covid-19 rapid test at a pre-defined location, by appointment the day before the event. Upon arrival at the test site they will be asked to present their V-Health Passport® for scanning, and a temperature check will be taken before they are directed to a test station.

The test takes 1 minute to administer with the results available in 10 minutes. The results are uploaded to their digital passport, which is then presented to officials for scanning, displaying the person's photo, a traffic light symbol to confirm the result, and the date of the test.

The digital passport is powered by ultra secure technology called VCode® which works alongside the testing kit to provide an intelligent traffic light system on a smartphone, identifying the person's test result as positive or negative. “Red” indicates a positive, “Green” indicates a negative test result and “Amber” indicates a countdown trigger date to the next test date required.

A more in depth screen can only be viewed by authorised medical staff.

The fan is then advised to return home and self isolate until the match the next day, when they can return to the stadium and present their V-Health Passport® for scanning before attending the event. To ensure social distancing remains and prevent large queues and bottle necks, the passport can be scanned by officials up to 100 metres away.

If a person tests positive the details uploaded to the digital passport can be used for contract tracing purposes through the national NHS Test and Trace programme.

If the trials prove successful, the aim is to roll out the programme across other venues for events like music concerts and theatre.

VSTE and their partners say this testing system is extremely secure because it doesn't use unsecured bluetooth technology or compromise private data. Instead it uses ultra secure end-to-end encryption with closed loop technology, making the passport unhackable.